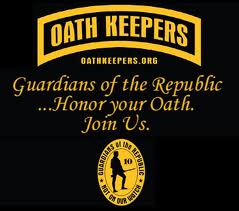 This is a guest contributor article written by Stewart Rhodes , originally published in the group’s newspaper in September 2010. As the founding member of the Oath Keeper group, he explains the constitutional and historical context behind the “10 Orders We will Not Obey”.

“Recognizing that we each swore an oath to support and defend the Constitution against all enemies, foreign and domestic, and affirming that we are guardians of the Republic, of the principles in our Declaration of Independence, and of the rights of our people, we affirm and declare the following:

1. We will NOT obey any order to disarm the American
people.

We will not make war on our own people, and we will not commit treason by obeying any such treasonous order.

Nor will we assist, or support any such attempt to disarm the people by other government entities, either state or federal.

2. We will NOT obey any order to conduct warrantless searches of the American people, their homes, vehicles, papers, or effects — such as warrantless house-to house searches for weapons or persons.

One of the causes of the American Revolution was the use of “writs of assistance,” which were essentially warrantless searches because there was no requirement to demonstrate probable cause to a judge. The first fiery embers of American resistance were born in opposition to those infamous writs.

The Founders considered all warrantless searches to be
unreasonable and egregious. The Fourth Amendment was written to prevent a repeat of such violations of the right of the people to be secure in their persons, houses, papers, and effects.

3. We will NOT obey any order to detain American citizens as “unlawful enemy combatants” or to subject them to trial by military tribunal.

One of the causes of the American Revolution was the denial of the right to jury trial, the use of admiralty courts (military tribunals) instead, and the application of the laws of war to the colonists. After that experience, and being well aware of the
infamous Star Chamber in English history, the Founders ensured that the international laws of war would apply only to foreign enemies, not to the American people.

Thus, the Article III Treason Clause establishes the only constitutional form of trial for an American (not serving in the
military) who is accused of making war on his own nation. Such a trial for treason must be before a civilian jury, not a tribunal. The international laws of war do not trump our Bill of Rights. We reject as illegitimate any such claimed power, as did the Supreme Court in Ex Parte Milligan (1865).

Any attempt to apply the laws of war to American civilians, under any pretext, such as against domestic “militia” groups the government brands “domestic terrorists,” is an act of war and an act of treason.

4. We will NOT obey orders to impose martial law or a “state of emergency” on a state, or to enter with force into a state, without the express consent and invitation of that state’s legislature and governor.

One of the causes of the American Revolution was the attempt “to render the Military independent of and superior to the Civil Power” by disbanding the Massachusetts legislature and appointing General Gage as “military governor.” The attempt to disarm the people of Massachusetts during that martial law sparked our Revolution.

Accordingly, the power to impose martial law (the absolute rule over the people by a military officer with his will alone being law) is nowhere enumerated in our Constitution.
Further, it is the militia of a state and of the several states that the Constitution contemplates being used during any emergency within a state, not the standing army.

The imposition of martial law by the national government over a state and its people, treating them as an occupied enemy nation, is an act of war. Such an attempted suspension of the Constitution and Bill of Rights voids the compact with the
states and with the people.

5. We will NOT obey orders to invade and subjugate any state that asserts its sovereignty and declares the national government to be in violation of the compact by which that state entered the Union.

In response to the obscene growth of federal power and to the absurdly totalitarian claimed powers of the Executive, upwards of 20 states are considering, have considered, or have passed courageous resolutions affirming states rights and sovereignty.

Those resolutions follow in the honored and revered footsteps of Jefferson and Madison in their Kentucky and Virginia Resolutions, and seek to enforce the Constitution by affirming the very same principles of our Declaration, Constitution, and Bill of Rights that we Oath Keepers recognize and affirm.
Chief among those principles is that ours is a dual sovereignty system, with the people of each state retaining all powers not granted to the national government. Thus, the people of each state reserved to themselves the right to judge when the national government they created has voided the compact between the states by asserting powers never granted.

Upon the declaration by a state that such a breach has occurred, we will not obey orders to force that state to submit to the national government.

6. We will NOT obey any order to blockade American cities, thus turning them into giant concentration camps.

One of the causes of the American Revolution was the blockade of Boston, and the occupying of that city by the British military, under martial law. Once hostilities began, the people of Boston were tricked into turning in their arms in exchange for safe passage, but were then forbidden to leave.

That confinement of the residents of an entire city was an act of war. Such tactics were repeated by the Nazis in the Warsaw Ghetto, and by the Imperial Japanese in Nanking, when entire cities were turned into death camps. Any such order to disarm and confine the people of an American city will be an act of war and thus an act of treason.

7. We will NOT obey any order to force American citizens into any form of detention camps under any pretext.

Mass, forced internment into concentration camps was a hallmark of every fascist and communist dictatorship in the 20th Century. Such internment was unfortunately even used against American citizens of Japanese descent during World War II. Whenever a government interns its own people, it treats them like an occupied enemy population.

Oppressive governments often use the internment of women and children to break the will of men fighting for their liberty,as was done to the Boers, to the Jewish resisters in the Warsaw Ghetto, and to the Chechens. Such a vile order to forcibly intern Americans without charges or trial would be an act of war against the American people, and thus an act of treason, regardless of the pretext used. We will not commit treason, nor will we facilitate or support it.

8. We will NOT obey orders to assist or support the use of any foreign troops on U.S. soil against the American people to “keep the peace” or to “maintain control” during any emergency, or under any other pretext.

We will consider such use of foreign troops against our people to be an invasion and an act of war.

Accordingly, the militia of the several states are the only military force contemplated by the Constitution, in Article I, Section 8, for domestic keeping of the peace. The use of even our own standing army for such purposes is without constitutional support, and the use of foreign troops and mercenaries against the people is completely unconstitutional, and an act of war.

We will oppose such troops as enemies of the people and we will treat all who request, invite, and aid those foreign troops as the traitors they are.

9. We will NOT obey any orders to confiscate the property of the American people, including food and other essential supplies, under any emergency pretext.

Deprivation of food has long been a weapon of war and oppression, with millions intentionally starved to death by fascist and communist governments in the 20th Century alone.

Accordingly, we will not obey or facilitate orders to confiscate food and other essential supplies from the people, and we will consider all those who issue or carry out such orders to be the enemies of the people.

10. We will NOT obey any orders which infringe on the right of the people to free speech, to peaceably assemble, and to petition their government for a redress of grievances.

There would have been no American Revolution without fiery speakers and writers such as James Otis, Patrick Henry, Thomas Paine, and Sam Adams “setting brushfires of freedom in the minds of men.”

Therefore, we will not obey or support any orders to suppress or violate the right of the people to speak, associate, worship, assemble, communicate, or petition government for the redress of grievances.

The above list is not exhaustive but we do consider these “Ten Orders” to be clear tripwires. They form our “line in the sand,” and if we receive such orders, we will not obey them. And for the support of this Declaration, with a firm reliance on the protection of Divine Providence, we mutually affirm our oath and pledge to each other our Lives, our Fortunes, and our sacred Honor.

Summary
Article Name
“10 Orders We will Not Obey”
Description
This is a guest contributor article written by Stewart Rhodes , originally published in the group’s newspaper in September 2010. As the founding member of the Oath Keeper group, he explains the constitutional and historical context behind the “10 Orders We will Not Obey”.
Author
Stewart Rhodes